Little Dude showing off his soccer skills…or futbol for all of my international readers.

Word on the street is that Santa may have room for a soccer goal on his sleigh. Shhhh. 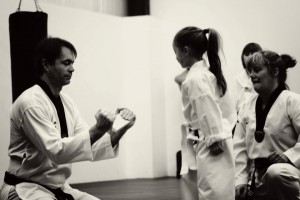 As I may have mentioned on a few occasions, the Princess is a bit girly. And by “a bit,” I mean completely.

She once claimed she didn’t want to be a dancer because dancing made her ribs tired!? And I somehow passed up the opportunity to write post recapping the soccer season – I think I blocked the experience out of my memory – but let’s just say that the last game consisted of lots of tears and absolutely zero running until she realized there was a trophy at the end…anything for jewelry.

But that all changes when she steps into the dojo (That’s not the name in Tae Kwon Do, but it reminds me of the Karate Kid so deal with it TKD purists.). She becomes assertive and strong. She stays focused and doesn’t shy away from the physicality. She listens and understands the power of discipline.

Tae Kwan Do has quietly become our favorite Princess activity.

The other night The Princess broke her second board, and got her second yellow stripe, passing her test with an Axe Kick.

I didn’t include an entire 80’s montage, but I did catch the magic moments. 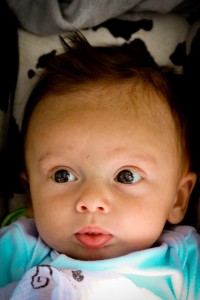 It’s 2010.  We have women’s suffrage.  Women have broken through the “glass ceiling” in corporations worldwide.  I read the other day that for the first time, more women are now graduating with PhD’s than men!

Women have made huge strides in equality, but from where I sit, Mom’s still keep the house together.  I think it’s an instinctual ability.

When Dad  steps in on a solo mission, there’s always a chance for a little craziness.  The mission will be accomplished, but it’s never quite as smooth as when Mom handles it.

Tuesday offered a good test.  The Princess had her first dance class, followed by soccer practice numero dos, and Mrs. Dude had her first photography class.  It was a busy day.  Tuesdays will be busy for a few weeks.  If you do the math, this leaves the Dude managing all parental tasks including to and from soccer, dinner, bath, bed…sans Mrs. Dude.

Solo parenting is tough.  There are a lot of challenges managing multiple little lives.

But, it also gives us a catalyst to focus on the moment we’re living in.   Worrying and/or getting  frustrated with kids makes the situation that much more difficult to handle.  Kids sense emotions and energy, and when the energy is off, kids tend to shut down.

It’s an interesting task running a solo mission and trying to balance peace and tranquility with the hurdles along the way.

Ever heard of the book Zen and the Art of Motorcycle Maintenance?  It grabs my attention every time I see it at a bookstore.  I’ve never read it.  I don’t have a motorcycle.

But, based on assumptions I’m making solely from the title, I think parenting offers similar opportunities to motorcycle maintenance.  Parenting is stressful, but we have a choice between letting stress get to us or going with the flow.

I’m no Zen scholar, but my loose understanding could be summed up with the phrase “going with the flow.”

So, Zen and the Art of Parenting.

I approached this solo mission as most dads would, blindly.  I didn’t give it much thought.  See, dads tend to stumble our way through things.  Like that whole not asking for directions stereotype…it’s a stereotype for a reason.

I planned to leave work a little early, pick up the kids, and hit the road.  Shouldn’t be more to it than that.

Except, he’s hungry and his milk supply is leaving to learn how to snap pictures, so it’s bottle time, it’s getting chilly so he needs to change, might as well change the diaper, make sure the diaper bag has all of the necessities, Princess needs to get dressed, she needs to find her cleats and shin guards…and put them on, she needs a water bottle, and the dogs should probably go out.

Ok.  Not quite as easy as pick up the kids and hit the road.  Thankfully Mommy was there to offer these suggestions prior to me leaving the house with a hungry, underdressed baby, and a soccer player without her gear.

To test my stress levels, these instances always seem to stretch to the last second of available time.  So, we’re rushing out the door.  But there’s really no rushing with a five year old and a 3 month old.  Life just moves at a slower pace.

I realized this as we meandered to the car, and I decided to move slower but more deliberately.  Give myself time to make decisive actions, and ultimately move at the pace kids move.  But more importantly, I was focusing on the task at hand…the present moment.  I was moving slower, but I was more efficient with my actions.

We pile in, and Little Dude starts to wail before we’re out of the driveway.  He’s been doing this in his seat lately.  Not a big fan of being locked down.  But we didn’t have time for consoling.

We hit the road, and I reached behind me trying to soothe him.  Yeah, not the safest idea, but a screaming baby requires a bit of risk taking.

As I pull to a three-way stop in the neighborhood, I let the car to my right and the car across from me go before me.  Both slightly beat me to the intersection.  Once they passed, I made my way through the intersection, and some dude decided he was playing the role of Citizen Patrol and yelled “Nice stop!” at me.

I’m still reaching back trying to soothe a screaming baby.  The windows are down, so he should be able to see this.  This seems like a situation where regardless of a minor traffic infraction, you should probably give the driver the benefit of the doubt.

Plus, I did stop!  I let two people go!  Perhaps I was rolling slightly, but it was a stop.

It seems like these types of situations always happen at the most inopportune time.  A perfect opportunity for me to lose it.  But before any words could pass over my lips, my mind jumped back in and reminded me slow down.  Getting upset isn’t going to make this trip any easier.

In a minute or so I was passed it, but Little Dude was not past his screaming.  I pulled over and was able to calmly tuck some blankets around him, and he was asleep in seconds.  If I had been mad, that stop would not have been that easy. 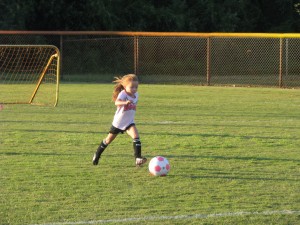 Eventually we made it to the parking lot.  As I’m wrestling with the Bjorn, the pacifier bounces out of his blankets and rolls under the car.  At this point I’m relaxing into things, and rather than letting that be the straw that breaks my will, I recruit The Princess, and she crawls under to grab it.

We roll into practice a couple minutes late, but we are all in good spirits, and we didn’t miss much.

Well, except that whole dinner, bath, bed thing.  But the kids were great, and I was practicing my Zen and the Art of Parenting, and we were good to go.  Whatever minor hurdles we encountered along the way we easily surmounted.

And the reward for a job well done, other than the opportunity to practice a little Zen, is a hug and kiss goodnight from a princess and  some Dude/Little Dude bonding time with lots of silly voices, tickles, smiles, and a five second lock of the eyes where it was clear connections were being made.

My boy is starting to realize who his Daddy is.  Glad I was in the Zen frame of mind to enjoy the moment…well, five seconds anyway.