Seems like most aspects of life move in some sort of cyclical pattern.  For example, we arrive in diapers, and most of us will exit in diapers.

Christmas is no exception.  As a kid, Christmas is a pretty special time.  I’m sure a lot of that has to do with getting “things” we want,  but for the most part, the excitement is just the joy of the experience.  Weeks on end of Christmas specials, holiday cookies, talk of Santa, time off from school, plans to be with family.  It’s a time when the world seems to slow, and kids are at the center of the excitement.

At some point, life grinds you down, and eventually some of the Christmas magic wears off.  Bachelor Dude often questioned the jolly holiday.  A large dose of religious dogma mixed with an extreme helping of consumerism seems like a dangerous recipe.  But kids make those questions seem irrelevant.

Nothing warms the heart of a parent like seeing their children filled with happiness, and Christmas makes that joy burst out of their little bodies.  Parenting is the bridge that brings that Christmas joy back to adults…at least for the Dude it is.

I have to hand it to the Moms of the world though.  I’m going to go out on a limb and stereotype a bit here.  I’m sure there are a lot of Dads who can fill this roll as well, but from the Dude’s experience, Moms hold Christmas together…and they love every second of it.

Mrs. Dude has been planning and budgeting for months, and it still takes a last minute sprint to finish all of the odds and ends.  Odds and ends, mind you, that no Dads the Dude knows could understand and/or execute.

The shopping alone would knock 90% of the Dads out, but then there’s wrapping…oh the wrapping!  It never ends.  But Moms are totally awesome wrappers…as if it’s in their gene’s…the wrapping gene.  Bows, and ribbons, and wrapping paper that fits the person.  Dudes buy one roll, try to wrap the first gift, give up half way through and put all the presents in bags with tissue paper piled on top…done.

But for Moms, it goes way beyond just shopping and wrapping…especially when it comes to the big fat guy in the red suit.  Based on the stories the Lady in the shoe is sharing about my oldest nephew, we are realizing this could be the last year that the Princess whole-heartedly, unquestionably, without a doubt believes in Santa.  The news spreads quickly with those kids at school, and kids aren’t dumb. 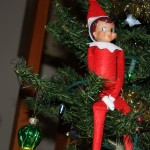 So Mrs. Dude went all out.  We wrote a letter to Santa, The Princess saw Santa at least three times, we got an email video from Santa, we tracked Santa as he flew, we even allowed the creepy Elf on a Shelf to stare creepily at us from random spots in the living room for the last three weeks (I don’t care what anyone says, that Elf is super creepy.). 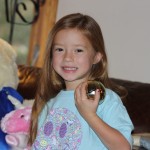 But the icing on the cake was the Santa display Mrs. Dude crafted on Christmas Eve.  Stockings hung by the chimney with care, a plate of cookies and carrots that the Dude had to eat, and the coup de grace, the fireplace door cracked slightly with a “jingle bell” strategically placed as if Santa dropped it during a quick exit, and glitter on the hearth!  Did you know Santa left a trail of glitter?!  Me neither.  But he does, and it’s awesome.

And The Princess ate up every bit of it.  She was so happy, and the happiness is so genuine that she makes everyone around her happy.  That’s the power of kids at Christmas, and I’ll trade that happiness for the pragmatic questions any day.

As a result, and despite brief occurrences of the Dude’s bah-humbugness, we had a great Christmas.  We had quality time with our extended family (arguably the true meaning of Christmas), ate great food, relaxed, played with new toys, the Dude was able to get a Christmas Day surf session, and to close out the holiday season, we enjoyed one of the best Christmas traditions of all, an annual viewing of Christmas Vacation.

In the immortal words of Clark W. Griswold, from the Dude Family to your’s, we hope you had “the hap, happ, happiest Christmas…”

PS – I’m sure you will all be excited to know that Santa added a cheetah to Little Dude’s zoo! 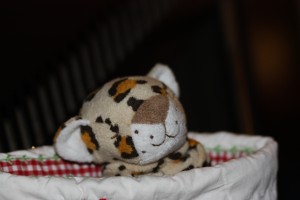 Welcome to the Zoo