Let me start by professing the Dude’s love for the Dukes of Hazard.

I was a HUGE Dukes fan as a young lad.

I can still recall the classic Sears picture hanging on the wall by the stairs in my childhood home of me in my “Sunday best.” Obviously my sky blue iron-on Dukes of Hazard t-shirt! Bo and Luke sitting on the hood of the General Lee. Classic 1980’s.

Not to mention my amazing General Lee replica with the roof that lifted so I could stuff Bo and Luke in their proper seats…it was just the right size for G.I. Joe’s by the way.

I bring this up because A. the Dude loves the Dukes, and B. Little Dude loves to put anything and everything in his mouth.

What do these have in common you wonder? The fantastic “Questionable Skills” blog I mentioned last week. Ted McCagg has done it again; he’s tickled my funny bone.

The Dukes of Choking Hazards…

“The only constant is change.”

It’s difficult to find the precise source of this quote, but after extensive research (i.e. five minutes on Wikipedia), I’ve decided to give credit to Heraclitus, a Greek philosopher…mainly because he’s a really old dude (c.535 BC – 475 BC).

This is about as close to “fact” as you can get; as such it is a widely understood and accepted saying…almost common sense.  Hence the difficulty finding the precise source.

I think the idea of change as a constant may be referred to as entropy in physics, but I’m all researched out now, so I’ll let The Professor (aka Little Bill, Papa, Dude’s Padre) correct me in the comments section if need be.

We all work every day to maintain the great aspects of our life and change those aspects that need some improvements…or at least we should be working hard at this every day.  But, in the  end, change will win; we can only prolong the inevitable.  Nature will take its course and change will prevail.

This should not imply that we should commit any less effort to maintaining what we love; that’s arguably the most important thing we can do in life.  But we should be able to accept change as a fact of life…perhaps even use change to our advantage.

For a short life span of five weeks, change is intensified.  20% of the Dude’s life is 6.6 years.  Change across that period is relatively mild.  The Little Dude on the other hand is in hyper drive; 20% of his life was spent last week.  Change across this period is pretty intense…for child and parents.

We ended week four with what appeared to be a mysterious choking episode for Little Dude.  I could have noted this in last week’s Lessons, but I really didn’t know what to make of it so I left it out.

The plot thickened in week five, and with some added information, the “choking” is now seen in a clearer light.

Last Saturday, Little Dude was sleeping in his swing (five feet from us) while the Dude and Mrs. Dude half watched tv and half watched The Boy.  About 45 minutes into his slumber, he woke up with a loud screech and then went silent immediately.  Mrs. Dude noticed that the air flow seemed to stop and jumped up to scoop him out of the swing.  The Dude, being a Dude, was a bit more slow to react, but the level of distress was clear in Mrs. Dude’s face (her Mommy Senses kicked in quickly!), and she was a bit frozen with Little Dude in her hands, so I grabbed him, flipped him over and began to pat his back.  With a whimper, the breathing was back in probably 30 seconds, but it was an intense 30 seconds, and there was no breath and no noise during that time…an eerie silence.

There was no way he choked on anything.  Nothing in his swing with him, he was in there for 45 minutes, and we were watching the entire time.

It shook us a bit.  We contemplated a visit to the Emergency Room, but Little Dude was immediately back to normal and enjoying his swing; so the Dude, being a Dude, convinced the Mrs. to skip the trip.   But in return, I stayed up and watched Little Dude the entire night to make sure everything was status quo.

I enjoyed some late night yoga to stay awake, and Little Dude slept like, well, a baby.  We switched shifts at the 6:30 AM feeding and kept him on watch the rest of the day.  After the 24 hour surveillance, we felt pretty confident Little Dude was ok.  However, we were still pretty confused by the experience.

Mrs. Dude conducted some further research (luckily her research is a bit more extensive than the Dude’s) down a path mentioned by the Pediatrician, and we are now adding a new variable to our “Poop Rules My Life” theory.  It seems to us that poop and heartburn rule Little Dude’s life.

The Mrs. found this link about an infant “choking” due to acid reflux and this list of acid reflux symptoms.  Not only does the article describe the “choking” episode almost word for word, but the additional symptoms are pretty spot on with The Little One.

Unfortunately, the acid reflux seems to be gaining momentum in week five and the past few days have seen an increase in spit up and some crankiness reminiscent of earlier weeks.  We’ve been using some meds the Dr. gave us “just in case,” but they don’t seem strong enough or The Boy has already outgrown the dose prescribed.  So, back to the Dr. tomorrow.

I’m not sure if we’ve figured out how to use this intense period of change to our advantage just yet, but we are doing our best to accept it and move on to the next curve life throws our way.

Luckily, the Dude and the Little Dude have found a calming mechanism they can both agree on; the vacuum.  My guess is a burned out vacuum could be in our future, but if The Little One is happy, that’s a change I’m willing to accept. 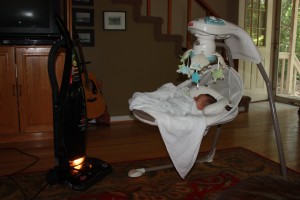 PS – Here’s one of my favorite songs about change.  The video is on the strange side, but the song is pretty good…plus, the Dude is a sucker for some good harmonica.