One of my all-time favorite quotes is from the wise sage Ferris Bueller.

“Life moves pretty fast. If you don’t stop and look around once in a while, you could miss it.”

So true. As age creeps on, it’s amazing how quickly the clock ticks on. There never seems to be enough time.

I guess the secret is to enjoy the time we have. But it sure would be nice to have an extra few hours.

So, what could we do with some added hours in our day? Below is a great infographic about “what we could do with an extra two hours,” but first, a bit about the source of the goods.

Hat tip to The Art of Less Doing for sharing the love, but this originated at the FancyHands.com Pintrest page.

I’ve never used them, but I love the concept. “Assistants for Everyone.”

Virtual assistants that will do just about anything you need them to do. And great prices. I haven’t figured out what to use them for yet, but the Fanciest of Hands is definitely on my short list to give personal outsourcing a try.

So, what could you do with an extra 2 hours? How about…

What Could You Do with an Extra 2 Hours?

This time-lapse video of a young girl aging from zero to 12 has been shared quite a bit the past couple days – gone viral as the cool kids like to say.

It is very cool to watch how kids progress. But it brings a tear to the Dude’s eye. Kids grow up too fast.

I’ve been using an app on the IPhone called “Everyday” to take a picture of me and Little Dude…almost everyday. The idea is that the app will take the pictures and put it into a video. I’ve been doing it for over a year.

It’s amazing to see how much he’s changed in a year. And how much the Dude’s facial hair has changed. 🙂

I keep thinking that I’ll turn it into a video. But I always decide to wait for another deadline. The reality is that it’s kind of scary to see how fast the Little Man is growing.

But the beauty of watching a child grow is the next stage is at least as fun as the last. Although, we’re seeing hints of the terrible two’s, so I reserve the right to retract that last statement. 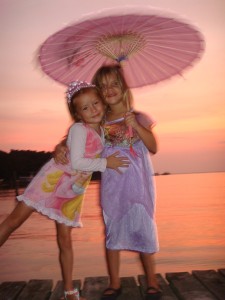 I can recall being a high school student with the weight of time weighing heavy on my mind.  Days took too long, weeks dragged on, school years felt like an eternity, and “old” was a ridiculously low number…which the Dude has surpassed by now.

But at some point, time shifts.  Out of nowhere, there’s never enough time in a day.  Weeks fly by.  A “school year?”  That’s not even a year!  “Old?”  I’m convinced that’s got to be a state of mind much more so than a number.

Time is a slippery foe.  Too much for the youth, and not enough for the aged.

From a parenting perspective, everyone seems to share the same view; “Kids grow up too fast.”  A cliché?…possibly, but it’s a cliché for a reason…there’s a strong element of truth.  As the wise sage Ferris Bueller once espoused, “Life moves pretty fast. If you don’t stop and look around once in a while, you could miss it.”

At five weeks, I’ve already uttered “they grow so quick.”  Right, crazy.  But…it’s true.  At five weeks, he’s already grown out of infant diapers and his first stage of clothes.  Not a huge deal, but it’s a sign of what’s to come.  Soon he’ll be sitting up, crawling, walking, running, driving, moving out.

A bit drastic.  But we know what’s ahead.  We’re witnessing the growth potential with the Princess.  She is five going on 16.

Proportionally, the first few years of life have exceptional growth.  From one through three, the rapid growth is apparent through the range of body movements developing; head stays up, sits up, crawls, walks, etc.  At four, life starts to click; concepts and ideas come into view.  By five, they seem like little adults…adults with the potential to spread glitter and perfume throughout the house like Tinkerbelle on a fairy rampage.

This past week, the Princess hit play date and sleepover age.  We’re jumping in with both feet.  First sleepover at a friend’s house, a play date at Casa de Dude, and the first sleepover here all in one week.  Adjusting to a five week old and taking in some rouge kids at the same time.  Great idea.

The Princess has relished this new found freedom.  The independence is palpable.  But with every autonomous act, comes a brilliantly orchestrated feat that could only be the product of the five year old mind.  Each time the five year old shows itself, I’m reminded to enjoy Now.  Moments lead to hours, days, weeks, and years.  Time moves fast.

Play dates and sleepovers are a big step.  Increased independence, new social interactions.  The Girl is on the fast track to adulthood.

However, the idea of a play date is much more grown up than the act of a play date.  The majority of a five year old play date consists of moving toys from one location to another.  It starts by pulling the entire inventory of toys from their storage location and erratically shifting from one creative game to another throughout the house, and most of these games require ALL of the toys to be moved to a new location every three minutes.  The end result is far worse than any house party the Dude ever threw at his parents’ house….not that I ever did that Mom and Dad.

In addition to partying like a rock star, the Princess is now using the phone like a teenager.  The Princess makes calls to her short list of numbers at freewill.  At this point the phone calls are mainly to Nina, but it’s a sign of what’s to come.

Nina made the mistake of mentioning a girls trip with the Princess two weeks before departure.  A bag has been packed next to her bed for 14 days, and she’s used her limited phone privileges to make travel plans and fill empty moments with a phone attached to her ear.  Like a teenage girl trying to keep her boyfriend on the phone, the Princess can hold a conversation.  I’m only privy to one side of the conversation, but this is what I hear…

To hold a 25 minute phone conversation shows amazing maturity.  And for every 25 five minute conversation, there’s a conversation full of non-sequiturs that pulls the Dude back into the moment.

Dude:  I’m not really sure I see the connection.

My guess is “kids grow too fast” because we are so busy we forget to pay attention and enjoy the moment to moment growth.  Here’s to paying attention.