This blogging stuff isn’t all glamor, paparazzi, and big bucks.  There are long hours required to prepare the random lineup of gibberish that pours forth.  On Friday night I was up late wrestling with some “widgets,” trying to wrench them into place in the blog layout.  By 1 AM, I was beat, but I tamed the widget.

After letting the dogs out one last time, my head hit the pillow by 1:30 Am, and I was prepared for a deep siesta basking in my blogging success.

At 2:20 AM the Dude woke to Mrs. Dude exclaiming “My water just broke…or I peed all over myself.”  Indeed it was her water, and the boy was preparing to make his entrance.

We laid in bed to gather our thoughts, and determined that it was a good idea to rest for a bit to build strength for the marathon delivery we were anticipating.  Within minutes contractions were starting, but we couldn’t get a consistent reading on the timing, so we figured we were relatively early in the process.  We decided we’d labor at home until about 6:30 AM.

Rest really was a naïve plan considering the excitement that was beginning to collect.  So, the Dude set out to pack an overnight bag, and the Mrs. hit the bath to relax as much as possible.

The contractions began to intensify, but continued to lack consistency; jumping from 5 to 10 minutes and back again.  As the intensity grew, Mrs. Dude launched into what would appear to most as a rigorous yogic ritual, but was actually every laboring position known to those that know a lot of labor positions.

Positions didn’t last for more than a minute or two, but each new position met its intended purpose and provided a tiny bit of comfort, more likely distraction, that helped the Mrs. make it through one contraction and on to another.

By 4:00 AM, we started to get the feeling that the intensity was increasing quicker than we expected, and Mrs. Dude was questioning whether her laboring techniques would provide the comfort needed to manage a lengthy labor.

Filling the role of concerned Birth Partner, I pressed the Mrs. for information in a meager attempt to understand the process and where we were.  However, I quickly learned that the Mrs. appreciates quiet suggestions and reassurance rather than inquiries.  She answered the Dude’s questioning with a question:  “Why do these contractions come every time you talk?  I’m not blaming you, but I do feel I need to point it out.”  Ah ha, point taken; no more questions.

At about 4:30 AM, we called in our labor coach; known as Nina to the Princess and Mom to Mrs. Dude.  Nina arrived at about 5:30 AM.  Just in time to assist the Dude in removing the Mrs. from her second bath.  Mrs. Dude was questioning the laboring techniques and hoping we didn’t wait too long to leave for the hospital.  The Dude and Nina provided assurance that she was doing great and we had plenty of time.

We hit the car, and within minutes, the cry of “I need to push!” was echoing through the baby chariot.  It was on!  I hit the gas, and we urged Mrs. Dude to take short breaths and try not to push.  It was an urgent situation, but in the back of our minds it felt like we had time.  We exceeded the posted speed limit by a bit, passed a cop who was either sleeping or couldn’t catch us, hit every green light, and made it to the hospital safe and sound.

Mrs. Dude hurried out of the car and through the doors.  Her hands slammed on the reception desk followed by “I need to push,” as her head swung down to cope with the growing pressure.  The attendant looked up at me and calmly, almost sarcastically, asked, “are we going to have a baby?”  I reiterated that we need to hurry and push.  Luckily, Mrs. Dude was ahead of the plan and already preregistered, so we just needed to provide some basic information to be admitted.  If only the Dude could remember basic information.

“What’s the name?”  The Dude provides the maiden name, which elicits a screeching correction from Mrs. Dude.

“What’s the date of birth?”  In a moment of clarity, the Dude chooses to ask the Mrs. for the correct answer.  Also, not the best approach, but slightly better than an incorrect answer.

The attendants are now somewhat curious about the couple they have before them.  A mom-to-be clearly about the welcome a bambino, and some dude who doesn’t seem to know the mom too well.  Which leads to the final inquiry in the line of questioning; “Are you married?”  Ah, finally an easy one!  The Dude knows the answer to this.  “Yes, we’re married,” which of course the attendant follows with “Are you sure?”

Great, I’m being mocked at 5:45 AM at the Emergency Room reception desk as my wife  writhes in pain about to push out my child onto the cold laminate floor and strangle me at the same time.  Thanks Nurse Crotchet; can we proceed now?

Did the stress get to me?  Possibly, but I pulled the same routine at Walgreens picking up prescriptions the next day.  Didn’t Einstein say he didn’t want to remember things he could look up…or something like that?  Perhaps I’m following in his shoes…I need a general info card for my wallet.

A nurse arrives, and we move past the Gatekeeper/Chris Rock.  Mrs. Dude is in the token wheelchair, and the Dude is steering her around corners like Dale Jr. at Daytona (that’s for all my NASCAR loving readers!).  As we round the last corner before hitting the delivery room, a cheerful nurse pops out in front of us and asks in a bubbly voice “Are we about to have a baby?”  Within a fraction of a second the bubbles evaporated from her voice and she was hit by the serious stick.  Mrs. Dude’s face said it all, and if that wasn’t enough the stern “I’m going to push” drilled the point home…the boy was ready to arrive, now!

With the exception of Mrs. Dude, everyone involved in the process seemed to assume we had plenty of time…but we didn’t.  Mrs. Dude was on a bed in record time, and the nurses were prepping at a rapid pace.  The initial measurements gave us all the information we needed.  The baby was here; there would be no further waiting.

Mrs. Dude was amazing throughout the entire process.  Calm, assertive, and strong.

The nurses worked to slow the progression to give the Dr. more time to arrive, but nature was calling, and the Mrs. needed to push.  Nina stepped in and explained that nature doesn’t always work on the Doctor’s schedule.  Mrs. Dude started to actively push, and the nurses moved into position to catch the freight train speeding down the birth canal.

The first push offered enough relief to allow Mrs. Dude to collect the breath she’d been using to fight off the pressure to push.  A sense of calm eased over her face, and the Mrs. asked “How are Gordon and Iris?”  The room was a bit confused.  Nina and I vaguely understood because we’d seen Mrs. Dude’s “shop talk” before, but the nurses were lost in confusion.  Mrs. Dude asked again, “How are Gordon and Iris?  Your dog and cat?”  The nurse in the catcher’s position brightened as she realized the topic of discussion, and the Mrs. explained that she worked at the animal hospital and knew the nurse’s Dog, Gordon, and cat, Iris.

Why this question came to mind, I don’t know, but the simplicity of it in such complex situation was striking.  The world was moving by us in a flash, our baby boy was about to be born, and Mrs. Dude could gather her wits among all of the confusion and pain and not only recognize a client, recall the names of her two animals, but also care enough to ask!

Add it to the list of reasons the Mrs. is easy to love.

The delivery continued for the next two minutes without a hitch, and we welcomed the boy child with open arms at 6:00 AM on the dot.  Within 15 minutes of arriving at the hospital Little Dude was in our hands…three and a half hours after the water broke and 20 minutes before the Doctor arrived.

Welcome to the world Little Dude. 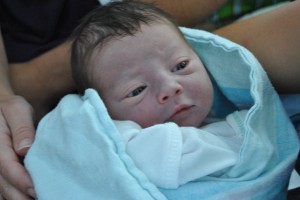