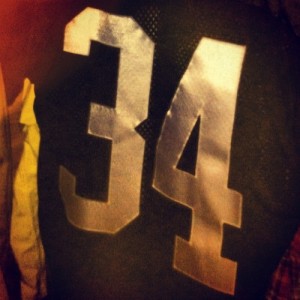 I hate to be away from the fam. For real. I don’t even like to leave the house. I work from home these days, and I challenge myself to see how many days in a row I can go without shoes. A week is not unheard of.

So, when I say I miss the fam, I mean it. I’m currently on the road, and I’m being forced to wear shoes…daily!

However, there is a bonus to road trippin’. Cable TV.

The  Dude Clan has lived without cable for about a year and a half. We really don’t miss it, and we’re better without it. We have Netflix to watch a few select choices, but for the most part life is better without a TV constantly running in the background. There’s a lot of rad to be done without TV.

Although, it’s nice to have it from time to time. I’m currently on my third football game today! Last night I caught the highlight of the roadtrip, ESPN’s 30 for 30 about Bo Jackson!

I’ve only owned one professional sports jersey in my life. Bo Jackson.

A black and silver #34 Raiders jersey I got from my aunt in 8th grade. It’s still hanging in my closet. It still fits….I can’t fit pads under it, but I can definitely rock it.

The only other jersey I ever entertained buying (but never did) was Chris Herren. Local Massachusetts basketball legend that ended up playing for the Celtics and having a vicious drug problem. Tough as nails. Classic Masshole. It’s awesome to watch someone your age make it to the bigs.

How does this relate to Bo? The only two 30 For 30 I’ve watched are Chris Herren and now Bo Jackson. Both were awesome.

Bo was a STUD! The studdliest of studs.

Killed it in baseball and football like a superhero. Thought of professional football as a hobby. He didn’t even workout. He just was the nastiness of the nasty…at 2 pro sports! Biggest, fastest, strongest…without trying. Just was.

I asked Mrs. Dude to send me a pick of the jersey hanging in my closet, and she responded by asking if I was selling it on e-bay. I let her know the Bo jersey would go to my grave.

The Dude spent the majority of his life growing up outside of Boston.

Boston has a rep for having a pretty rough citizenry. Very aggressive drivers, fast paced lifestyles without much patience, direct even when you shouldn’t be, sarcastic sense of humor, and usually show love by busting chops.

In fact, people from Massachusetts are often referred to as Massholes. As in Massachusetts + Asshole = Masshole. It’s even become a term of endearment for many Mass residents.

Here’s the definition on Urban Dictionary.

I’ve been out of Mass for a while, and the Southern hospitality has smoothed most of my rough edges, but the Masshole can never be fully removed. I’m a lifer to some degree, and Mrs. Dude has married into the fraternity.

However, I think the Masshole attitude bit misunderstood. Mrs. Dude was prepared for the worst and pleasantly surprised by the kindness when we went to visit. There’s a lot of goodness under the rough exterior, and Massholes tend to take care of their own kind.

Here’s a great example of Massholes at their finest. During Disability Awareness Day at Fenway Park, an autistic man sang the National Anthem, and when he was tripped up a bit, the crowd joined in and sang along.

A small piece of kindness from a lot of people all at once. Pretty cool to see.