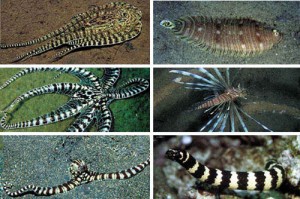 A while back I posted a link to this article about the high intelligence of the octopus. I mentioned…

“Octopus are amazing. I never realized how amazing. They always seemed pretty cool in a deep down beneath the sea kind of the way, but WOW super cool.”

That article dives deep (like that pun?) into the high intelligence of the octopi. It is well worth the read. I predict amazement.

The Mimic Octopus. This dude copies other sea creatures!

Changes shapes and acts like other creatures. An octopus acting like a snake! At one point in the video it is running – yes running – on the sea floor.