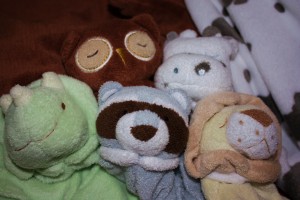 Everyone needs a little security in their lives.  Nothing beats Mom’s tightly held hand or warm hug, but security could be as simple as a favorite hat, a lucky t-shirt, a power tie, or a soft, cuddly blanket.

Mrs. Dude is a pretty great Mom, but she explained to the Dude that it’s not possible for her to hold Little Dude’s hand or hug him 24 hours per day.  So, we were faced with the daunting task of determining how to offer security to the Little One when the Mrs. is absent.  I suggested a piece of my wetsuit since that keeps me warm and cozy in the water, but Mrs. Dude pulled rank and said the Mom would make this decision.

Ok.  One less decision for the Dude process; works for me.

I watched silently as a tiny silky blanket with a dog’s head that was three times too large was paraded around the house as the worthy contender.  I knew it wouldn’t last, but the Dude had taken a vow of silence on the subject.  “Oh yeah, Mrs. Dude, great blanket.  The Boy will love his giant headed dog.”

The vow would have probably been broken considering how goofy this dog was, but the Dude had confidence in the Mrs….and the Dude’s sister had already paved the way for this decision.  The lady with four kids under the age of 6 probably has the whole security blanket thing figured out.  The Dude knew that it was only a matter of time before Mrs. Dude was exposed to the greatest security blanket known to man.

After a visit with the Dude’s extended fam, the Mrs. declared that she was going to get one of the same security blankets the cousins have.  This was a big step, but it opened the door to an even harder decision; what blanket to choose.  The blankets come in a variety of animal shapes, basically stuffed animal heads on the top of a blanket.

The cousins each have a different animal, but with a twist.  The twist being that one blanket really won’t last, so multiple blankets were purchased as back-ups.  This is great in theory, but really this just leads to the kids needing multiple blankets of the same type; one just won’t do if I can have two.  As a result, Mom and Dad are forced to corral multiple, identical blankets for each child.  This is pretty much a full-time job; they had to hire a nanny to watch after the blankets!…not really, but they should!

We were committed to the type of blanket, but Mrs. Dude couldn’t make an animal choice, so it was decided that we would get three to help us determine our favorite; the owl, dinosaur, and lion would be included in the selection process.

For two months leading up to Little Dude’s arrival, the Dude and the Mrs. slept with the blankets under the guise of adding our scent to the fabric, but really we were snuggling with each trying to choose our animal.    The lion pulled out to an early lead, but the Mrs. couldn’t keep herself off the website and three grew to five; the cow and raccoon joined the pack, adding to the indecisiveness.

No clear winner has yet to be established.  However, now I’m concerned that if/when a winner is chosen, we will then have to wade through multiple impostors to reach the true source of security during times of crisis.  It’s inevitable that when security is needed, the true champion will be unnoticeably wedged between the couch cushions while the rest of the animal tribe is frolicking in the open, and the Dude will undoubtedly try each and every impostor before embarking on the hunt for the chosen one, all the while Little Dude wailing away.  It’s a grim scene, but totally predictable.

Perhaps that’s better than hunting for multiples of the same blanket, as the Dude’s sister must do, but probably not.

Then again, the kid usually determines the winner, and most times the choice is completely unexpected.  The Dude latched onto  a pillowcase, and the Princess fell in love with a blanket that was purchased as a gift for another baby.

My guess is the Little Dude catches us off guard with his security blanket choice…I’m still holding out for the wetsuit. For now, we’re enjoying the zoo and trying to give each animal equal face time with the “Decider” (as George W. would say).

Choose wisely Little Dude, the fate of the zoo is in your hands.