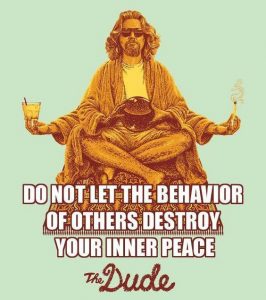 I’ve collected a few Lebowski-related topics in my online travels.

Much like The Dude, the topics veer towards the existential with a mix of the absurd. A perfect recipe.

This is a bit of an ode to the bathrobe and the impact COVID has had on our collective willingness to lower our expectations – in a good way.

Even a discussion of bathrobes slides into a deeper meaning with The Dude – “Control is an illusion, stillness is salvation. In other words, you gotta chill.”

Huckberry is a great online store – if ya didn’t know, now you know.

The Lebowski Theorem of Machine Superintelligence

Apparently, AI has a lot in common with The Dude as well. Who woulda thunk it? Not so worried about AI taking over the world if it’s so chill!

What I’ve Learned from Jeff Bridges

Jeff Bridges is almost The Dude in real life. A dude after my own heart. I love how much he digs Lebowski…”The Dude is a wonderful character. I wouldn’t mind if I was mostly recognized for that guy. That doesn’t bother me at all.”

Does the Dude Abide by the Tao? A comparative study of Dudeism and the Tao Te Ching

I’ve been a fan of the Tao for many moons. The Dude’s chill vibes strike a chord with me for similar reasons the Tao’s free-flowing philosophy has led my mental charge for years – chill is cool.

This is a pretty academic comparison of Dudeism and Taoism. Worth the browse.

Exploring the Real-Life Religion Based on “The Big Lebowski”

I’ve covered my ordained-priest status with Dudeism before. Here’s an article exploring Dudeism…

The call for people to re-examine their priorities in a materialistic system is in no way a new one. Dudeism is bridging the gap between the obscurity of the mystical world and popular culture by building its legacy on The Dude which has contributed to its popularity.

Rather than rejecting all moral codes, the Dude just wants everyone to relax a little.

The world is a complicated place. But maybe there are a few simple remedies. Relax. Take it easy. Flow. Wu Wie. Abide.

A Musing on Abiding

Perhaps there are similarities that underly all of life’s “truths.” We’re just recycling and relearning the same truths in new contexts.

At some point, we should try to retain these truths.

Or maybe letting go is THE truth.