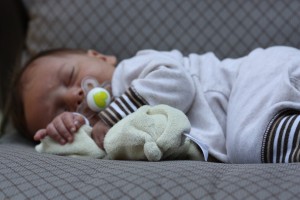 Life is full of firsts.  Firsts continue from day 1 to the end.  I’m sure my Grandfather never realized we’d all be experiencing “Tweets” on regular basis.  Not that he knows what a Tweet is, or email, but you get the point; we all have the potential to experience firsts until our last day.

Like every aspect of an infant’s life, firsts are intensified.  Infants experience firsts at a breakneck pace.  Everything is new to them.  And new parents love to point out the firsts; first giggle, first hang nail, first poop on a Tuesday when it’s raining, etc.

The Dude and the Mrs. fall into the exuberant category when it comes to Little Dude’s firsts.  We often comment to each other about silly firsts, but this week held some significant firsts…from the Dude’s perspective anyway.

Acid reflux was confirmed this week, and we got an increased dose of medicine.  Mrs. Dude also cut out any food with taste from her diet to be safe.  Thankfully, these adjustments seem to be working…for now.  The acid reflux symptoms have decreased quite a bit.  Notice, I did not say the crankiness has decreased.

In the ever-changing landscape of an infant, another crankiness source arrived on the scene.  Could The Boy be hungry?  He’s eating almost every two hours, but this week, the “I need food now” cry has increased in frequency and intensity.

We decided to do a little experiment.  Mrs. Dude pumped while I fed Little Dude a 4 oz. bottle.  He downed the bottle in about 20 minutes, and passed out for four hours.  Mrs. Dude was only able to pump 2 oz.  This isn’t a definitive answer.  He may get more when he nurses, and it’s only one test, but it does show interesting results.  Could it be that he’s not eating enough?

He’s gaining weight faster than expected, so clearly he’s eating.  Perhaps a growth spurt this week?  We are going to try to work in some additional pumping in an attempt to increase the milk supply and build some more reserves (and by “we” I mean Mrs. Dude…thanks Mommy), and keep an eye out for the hungry symptoms.