Passed Thanksgiving and fast on the way to Christmas. How does time move so quickly? The older we get the faster it moves? Or do kids do that to us? It’s hard to keep track of what’s going on in the chaotic circle of the Dudes.

As a result of the fast gallop that life is taking into the future, the Dude has once again accumulated some tasty morsels of internet sweetness. This edition of Dude’s News will be a bit of a potpourri, but there will be some holiday tinged items to keep us festive.

The resident photographer was out at a meeting the other night, so the Dude got to enjoy a solo dinner with the kiddos. Dinner conversation with the kids is always fun. The Princess generally leads the way.

After a minute of contemplation. Princess: I like candy. It’s a type of sweet.

This exchange is followed immediately by, Princess: But I don’t want dessert tonight.

Princess: Mom gave me a consequence this afternoon; no dessert. But I’m all right with it. Mom gave me a choice – tv or dessert – and I chose dessert. I felt like telling the truth would be better because later you would have said, Princess why didn’t you tell the truth?

She’s right, I would have. I congratulated her on telling the truth, and we talked about what happened while we finished dinner.

As I was clearing the table, Princess: But Mom said I could choose not to sleep in my bed, and that’s what I chose. I’ll just have to sleep in the bean bag.

Dude: No, that’s a punishment for us dealing with a tired version of you tomorrow.

In other local news, Princess finally has a loose tooth! Hasn’t fallen out yet, but it’s on the way. And, the boy’s hair is growing fast and furious. We are officially passed the one year mark (Thanksgiving) since his last haircut. Awesome. 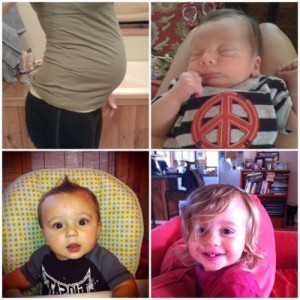 Evolution of a Crazy Man

Say It Ain’t So
Is the U.S. government seriously considering pizza as a vegetable?! For real?! This is some sort of bizzarro world, right? House of Representatives say pizza = vegetable. 🙁

11 Best Illustrated Children’s & Picture Books of 2011
Unfortunately, I can’t say that I’ve read all (or any) of these books, but they all seem pretty dope, so I figured I’d share.

Street Skiing
When I grew up, we use to drive six hours to Upstate New York for a week long ski vacation each year. We had friends that lived in NY, so it was a good excuse to visit and enjoy a week of skiing at the local mountain.

This dates me a bit, but snowboarding wasn’t even really an option at that point. It was skiing or nothing. By the time I hit college, I traded in the skies for a snowboard, and I never really looked back. Skiing seemed dated to me.

But skiing has regained much of its coolness over the years, and this video actually made me envy skiers again. Thanks Kottke.

We took a trip to West Virginia for Thanksgiving. It was a great time in the mountains with family, but the seven hour car ride was a bit challenging. Anytime with two adults, two children, three dogs, plus luggage, locked in a vehicle for seven hours is going to be tough. Now mix in some puke, and you have a legendary (or is it normal?) family road trip.

The Princess got sick about five minutes after we entered the car for the ride home. She handled it like a champ, and there was no sign of sickness the next day. Made for a brutal trip, but glad it passed quickly.

Education
Free education…that’s fun?! Can’t be. But it is. Check out this awesome site (www.KhanAcademy.com) that is so simple, but such an amazing idea.

Over the years, I’ve realized how important – and cool – math really is, but figured I squandered my opportunities in school to truly understand it. Strange considering my Dad is a math professor. But Khan Academy has given me the gift of free math tutoring that is easy and fun…for real. And although they (really just he) started with math, there are all sorts of new topics coming online.

Here’s how the site describes itself:

Watch. Practice.
Learn almost anything for free.
With a library of over 2,700 videos covering everything from arithmetic to physics, finance, and history and 253 practice exercises, we’re on a mission to help you learn what you want, when you want, at your own pace.

Learning
The Dude is a big fan of education. Not necessarily “formal education,” but learning in general. It’s fun to learn new things, and beyond love, it’s probably the most important aspect of life. So we is that we start to learn?

How about before we’re born?! Sweet! This is a cool TED talk…

Surf Break
Everyone needs a little surf in their life. Here’s your dose for today with a surfer with one of the coolest names, Taj. (Thanks Kid)

Christmas List!
For all of those hard to shop for little dudes and dudettes, here is the Dude’s absolutely favorite list of the 5 Best Toys of All Time from Wired Magazine.

If you know Wired, you’re probably expecting some sweet technical gadgets, but be prepared to be amazed by simplicity. Love it.

History
In the first edition of Dude’s News I mentioned an article that discusses that early humans (as in 100,000 year old humans) were intelligent enough to seek out and mix materials to create paint for cave art. Very impressive.

Along the same lines, here’s an article that suggests that humans 42,000 years ago had enough “high levels of planning and complex maritime technology” to go deep sea fishing for tuna! Unreal. Our educational system teaches us about the last one to two thousand years, and the way we learn it makes it seem like there isn’t much to learn beyond that. Seems like there was a whole lotta life going on before our current frame of reference.

Time
Awesome article. Ten Things Everyone Should Know About Time. Time is a amazing.

Here’s a sneak peek at #10:
10. A lifespan is a billion heartbeats. Complex organisms die. Sad though it is in individual cases, it’s a necessary part of the bigger picture; life pushes out the old to make way for the new. Remarkably, there exist simple scaling laws relating animal metabolism to body mass. Larger animals live longer; but they also metabolize slower, as manifested in slower heart rates. These effects cancel out, so that animals from shrews to blue whales have lifespans with just about equal number of heartbeats — about one and a half billion, if you simply must be precise. In that very real sense, all animal species experience “the same amount of time.” At least, until we master #9 and become immortal.

Make sure to enjoy all one and a half billion beats!

Space
University of California, Berkeley, astronomers have discovered the largest black holes to date ‑- two monsters with masses equivalent to 10 billion suns that are threatening to consume anything, even light, within a region five times the size of our solar system.

Stop and ponder that for a minute. The size of 10 billion of our suns!? Think about the size of the Universe. We are just a tiny little speck in the middle of nowhere among an infinite amount of galaxies, stars, and planets. From a sheer statistical perspective, there’s no way we are alone in the Universe. No way. There is soooo much we have no clue about.

Seems like we should all be smiling much more.

Holiday Rituals
In the last edition of Dude’s News, I mentioned that I’ve been testing out the “primal” diet/lifestyle, and I have to say that it is going very well. Based on a month or so of walking the walk, I would highly recommend considering it. The ideas seem like commonsense…to the Dude anyway.

Here’s a recent post from Mark’s Daily Apple, the primal blog that I’ve been following, that discusses ritual, and it’s a great reminder of the importance of our holiday rituals, regardless of what they are.

Over the years, I’ve questioned the specifics of the rituals to much, and as a result I lost the bigger picture. It is important to bond us, as groups, in a common story and experience. Rituals help us know who we are and where we come from.

Keep up the rituals, and if you don’t have any, now’s a great time to start.