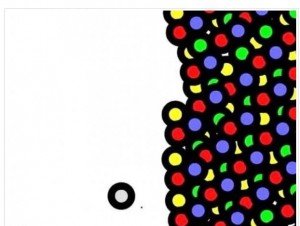 Here’s a video by Larken Rose called “The Tiny Dot.” It’s a very simplified view of government and taxes.

I don’t know much about Larken Rose. I’ve heard one interview with him, and he has some interesting ideas. He has a new book (this video is a promotion for said book) titled The Most Dangerous Superstition. His ideas seem to center around the idea of self-reliance and local communities.

The “superstition” Larken’s book discusses is our belief in the need for authority. We all seem to believe that we need an authority to keep the world running smoothly. Larken thinks we can do a better job without this authority. He doesn’t claim to have the answers to accomplish monumental task, but he does create an interesting line of thought.

Anarchy? Based on the Wikipedia definition, Larken’s theories seem to fall under the “anarchy” label.

Ignorance? Brainwashed? Maturing? Anarchy use to carry a negative connotation in my mind, but Larken’s ideas have a spark of simplicity that seems to apply to the world today.

Given the current state of broken political and economic systems worldwide, should we continue to put our faith in this “authority?” Has the “authority” demonstrated its expertise in management of the welfare of the whole?

Would self-reliance, strong community values, and management on a local level be a stronger approach?…could it be worse than what we have?

“The Tiny Dot” is definitely simple, but sometimes simple carries the strongest message.

I’m not motivated to read his book because I feel like I get the gist of the thoughts, but mainly because I think a lot of the current events need to sort themselves out regardless of different philosophical and political perspectives, but the message of “power to the people” does seem carry some value…especially if/when corners are turned and tough questions start to be asked. 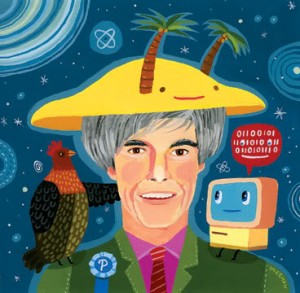 The Dude has been on a slow blog roll for a couple weeks.

A week or so ago I mentioned that Mrs. Dude has me working a 2nd job as a painter, and the sun room painting project has been consuming my extra time. Hence the slow blog roll.

In that post I said, “We should be able to drop the brushes soon and get back to life without painting.” Nice and vague Dude, good work.

I didn’t anticipate this lack of commitment to a deadline and getting “back to life without painting” would still be dragging on almost two weeks later!

Why do Dude projects always take longer than expected?!

Turns out I have an answer to this question. Hofstadter’s Law.

Hofstadter’s law, conceived by the cognitive scientist Douglas Hofstadter, goes like this: any task you’re planning to complete will always take longer than expected – even when Hofstadter’s law is taken into account.

Yep, sounds like every project the Dude takes on.

Here’s a quick read about Hofstadter’s Law from the Guardian. It’s worth 5 minutes to read (although, I’m sure I’m underestimating how long it will take :)), but I’ll pull out a couple quotes I dig…

So, as I spend my kid-free Saturday inside painting rather than enjoying the summer sun, I’ll keep Mr. Hofstadter’s Law firmly in my mind to help me remain realistic.

I’m going to finish today – says the painter who will finish sometime next week…maybe. 🙂

PS – The image included here is from an article/interview Hofstadter had in Wired magazine…also worth a quick read. This Hofstadter dude seems like a cool cat.