This works. I’ve been using the same razor for a month. For reals.

The Dude would not steer you in the wrong direction.

Only one way to find out…give it a whirl. 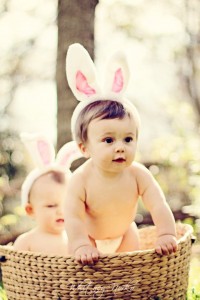 Happy Easter from the Dudes. Little Dude makes one heck of an Easter Bunny.

In case you’re wondering where the Easter Bunny comes from, Newser has you covered…those crazy pagans.

The internet is full of urban legends and conspiracy theories.

Ever heard the one about Mr. Rogers being a tattooed military sniper with a number of confirmed kills? Yep, that’s an urban legend floating around the tubes of the interwebs.

Luckily the internet giveth and taketh away. It’s a feeding ground for rumors, but also for debunking rumors. Enter Snopes.com; the internet’s rumor clearing house.

Snopes confirms that Mr. Rogers was indeed a mild mannered, aged gentleman with no military background. Another victory for the power of the internet.

I’ve been slowly turning our yard into a garden oasis for the past couple years. I’m not sure Mrs. Dude would describe it with those words, but “garden oasis” is how it appears in my mind.

As part of my ongoing garden research, I started following a blog titled “The Archdruid Report.” I have no idea how I found it, but it’s interested me enough to keep me hooked for a few months. Mainly because the author has an extensive background in the conservation movement of the seventies and shares great gardening projects.

But as I’ve read the author’s work, it’s become clear that he holds some drastic opinions. Opinions about where our culture and our world are heading. These opinions center around the author’s belief in the fact that the world has passed the point of “peak oil.” As a result, there are an endless list of problems facing the world, and a significant level of distrust for the powers-that-be that have their own interests in mind.

These strong beliefs have benefited me by motivating the author to share his opinions and conservation techniques on the blank canvas of the internet, but how accurate are the beliefs? Where’s Snopes when you need it?!

The Dude has his own opinions on the direction of modern culture, but I haven’t taken the time to form an opinion on peak oil. I’ll admit it is an interesting topic, but there’s no easy answer…at least not with the incomplete information governments are willing to share and the “spin”that inevitably pours from political and big business cake holes. I’m sure science could form an educated opinion, but good luck avoiding political and big business influence to get to that opinion.

It’s a subject that I’ve consciously avoided. So I read the blog for it’s gardening and conservation tips, and it is well worth the time. But the author is a good writer, and his opinions seem well-informed. It’s difficult to remain entirely uninfluenced.

But last week I came across this article from Popular Science that reminds me to keep an open mind. Based on my Wikipedia research, Popular Science is a pretty well respected science publication.  It’s no Snopes.com, but at least worth considering.

So, oil not made from dead dinos?! Sweet education system. Seems like we learn a lot of “facts” during our educational indoctrination, but I’m not sure we understand the definition of “facts.” Facts should be absolutes, right? Especially when the entire world seems to be built upon those “facts”?…i.e. petroleum and it’s limited availability.

The world is too much of a mystery. The Dude is sticking to his gardening.

I’m not going to buy the peak oil he’s selling, but I dig his gardening tips (ah, great pun!); the Archdruid says birds are good for the garden. Tree swallows to be specific. They eat flying insects.

Seems like a good idea to me. A great opportunity for a little DIY project and some added wildlife to the oasis.

I consulted a couple websites for design, and away we go….

Come on trees swallows, won’t you be my neighbor?

The Easter Bunny made an early delivery – thanks Nina ;). The Boy was in need of some sort of swinging apparatus, and the giant bunny carrying colored eggs came through big time.